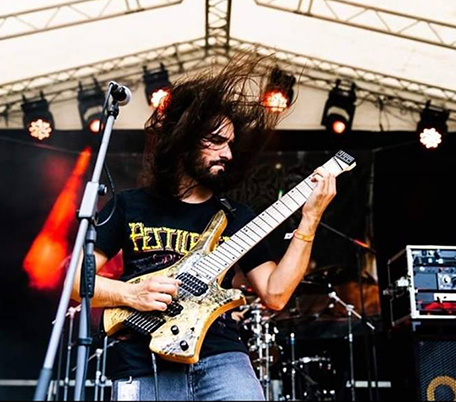 Overload Guitars is proud to annunce a deal with Mirko, guitarist and founder of the progressive metal Band “Coexistence”.

Mirko is the founder and composer of the progressive death metal band Coexistence. He’s a private guitar teacher and he’s currently studying at the Modern Music Institute (MMI).

Coexistence was formed in 2016 in Siena and in 2018 they released their first EP ‘Contact with the Entity’, which is considered one of the best EPs of the year 2018.
After performing in several concerts and tours throughout Italy, in 2019 Coexistence played in the 19th edition of Metaldays in Slovenia, on New Forces stage.The main sources of inspiration of the band are Cynic, Beyond Creation, Obscura, Augury, Exivious, Exist, etc. The band is currently working on the recording of their first album at 16th Cellars Studios.

The custom guitar crafted for Mirko is a Themis 8-string Bolt-on.

“I had never tried such a versatile, comfortable and unique-sounding guitar as the one Matteo has made for me.
With no doubt it’s the best I’ve ever tried, capable to range from the heaviest distortions to the most crystal-clear cleans. Don’t forget we’re talking about an 8-string guitar! It’s perfect for genres such as death metal but above all for prog and fusion.
The quality of the woods and of the manufacture is unquestionable: it’s enough to play for a few seconds to feel it. The choice of the pickups is important too. Matteo recommends Gorilla Pickups. The model assembled in this wonderful guitar is ‘Spacenout’, which embraces very well the concept of the instrument.”